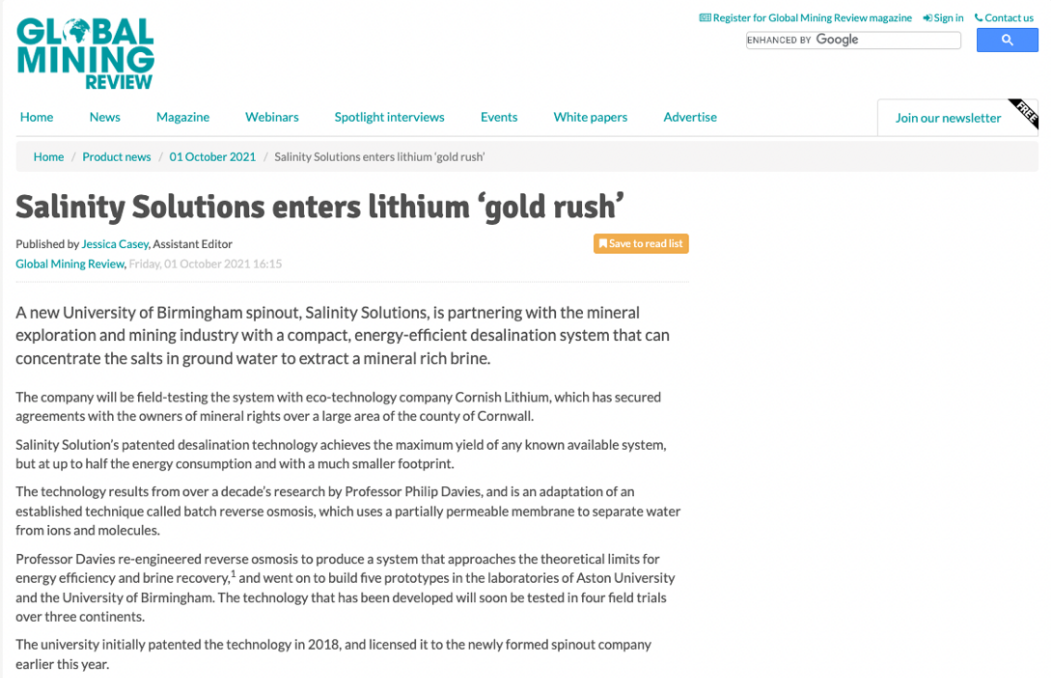 A new University of Birmingham spinout, Salinity Solutions, is partnering with the mineral exploration and mining industry with a compact, energy-efficient desalination system that can concentrate the salts in ground water to extract a mineral rich brine.

The company will be field-testing the system with eco-technology company Cornish Lithium, which has secured agreements with the owners of mineral rights over a large area of the county of Cornwall.

Salinity Solution’s patented desalination technology achieves the maximum yield of any known available system, but at up to half the energy consumption and with a much smaller footprint.

The technology results from over a decade’s research by Professor Philip Davies, and is an adaptation of an established technique called batch reverse osmosis, which uses a partially permeable membrane to separate water from ions and molecules.

Professor Davies re-engineered reverse osmosis to produce a system that approaches the theoretical limits for energy efficiency and brine recovery,1 and went on to build five prototypes in the laboratories of Aston University and the University of Birmingham. The technology that has been developed will soon be tested in four field trials over three continents.

The university initially patented the technology in 2018, and licensed it to the newly formed spinout company earlier this year.

The first automated prototype was built by Tim Naughton, who is now Technical Director of Salinity Solutions. He approached engineering veteran Richard Bruges for help, and Richard, who founded the Proving Factory and venture engineering company Clean Engineering, stepped in.

Salinity Solutions is now backed by Clean Engineering, which has provided investment and a structured product development process, and Richard has become a Director of Salinity Solutions. The company has also appointed Antony Cockle as Commercial Director.

Naughton commented: “The unit we supply to Cornish Lithium has been designed to withstand the elements. We’ve simulated real-world conditions in the laboratory using feed water supplied by Cornish Lithium, and the system is reacting as expected and to the efficiencies predicted by our algorithms.”

Dr Rebecca Paisley, Exploration Geochemist at Cornish Lithium, added: “We are actively engaging with companies developing innovative, extraction technologies that are energy efficient, with a small footprint, and capable of processing the unique geothermal waters found in Cornwall. The technology being developed by Salinity Solutions meets our criteria and we look forward to testing their pilot system at our Geothermal Water Research Site to potentially aid in the production of lithium salts.”

Philip Davies has recently been elected to Board of Directors of the European Desalination Society. He is continuing his research into water purification, and is currently working in Germany to develop a system that works at higher pressure and delivers more concentrated brine. Salinity Solutions has secured the IP rights to innovations that result from this research. He has funding for further field trials in agricultural and industrial settings, and collaboration with commercial companies to evaluate cost and environmental benefits that are additional to reduced energy consumption compared to traditional reverse osmosis.

Salinity Solutions is launching a crowd-funding campaign later this month to fund the first field trial at Cornish Lithium’s site in Redruth, Cornwall, by early 2022.

Lithium is used in electric car batteries and static storage devices for electricity, and the global demand for this rare earth element is rapidly escalating. Although it is vital to the UK’s industrial strategy as it moves towards a zero-carbon future, the country has no indigenous source of this mineral.